In Shadows and Dust - Enlightened by Darkness

by In Shadows and Dust 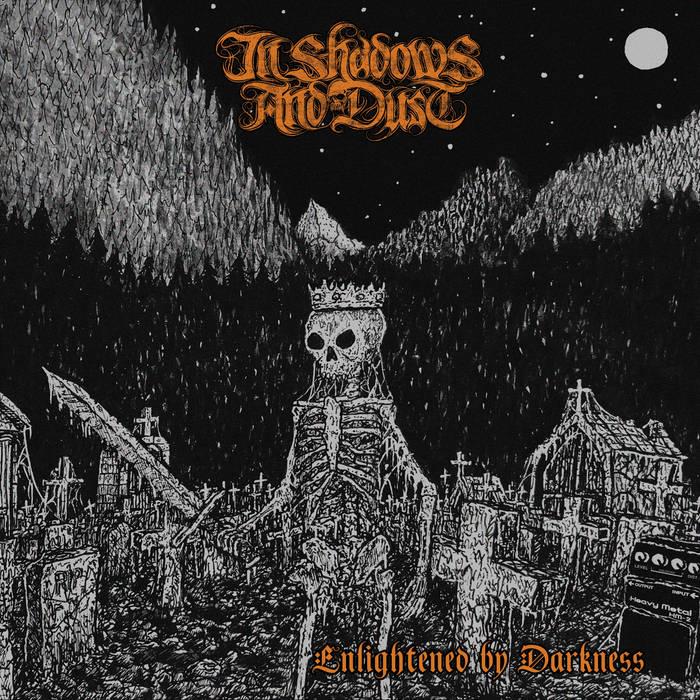 Blaine Ooksgiver One man show In Shadows And Dust return once again with a fantastic slab of blackened death metal entitled Enlightened By Darkness. I'm in love with the bass guitar on the record, it's audible, yet not overbearing and too much. All the instruments just flow together. The music is straight to the point and definitely a great starting place for new people to Redefining Darkness Records!

(I reviewed this album already, but this is just in case the original review doesn't show up) Favorite track: Deathlike Silence.

William Ring Crust-Groove? Blackened Thrash? I have no clue how to describe this sound besides heavy and amazing. Favorite track: Looking Into the Void.

tank_06 “This is a vendetta - a sweet revenge.
Like a punch - in your face.
I’m going to rip your fucking face!
Taking your teeth with my fist. Wrecking and smashing your ribs away - watch me smile.
Feel my revenge. Eye for an eye, now you will pay. Feel my revenge.
As the life drops from your eyes, I can see you leaving this world.
As the death comes to pick you, regrets are too late.
Now it’s straight to hell.”

Damn, Mr. Thirion... hard as fuck.
Let’s go piss on their grave later too, maybe that will make you feel better.
The sound you’ve captured on this album is just so fucking amazing. Praise almighty HM-2. You da man.
-Jeff Favorite track: Revenge.

"Steeped in HM2 death metal worship, Enlightened by Darkness is In Shadows and Dust’s fourth album in as many years. Melding HM2-driven death with cold black metal, it’s not uncommon for Thirion to sharply transition from soaring blackness to bass heavy, grooving death metal at the drop of a hat. There’s also a healthy dose of D-beat injected into the songs, meaning that In Shadows and Dust isn’t a project that retreads ground that’s been explored countless times. "
- Decibel Magazine
goo.gl/w4S6To

"...the massive HM-2 tone (the saw is the law!) provides a monstrous undercurrent to a track that’s propelled by furious battering and thundering drumwork and suffused with waves of vicious, roiling riffs. No less vicious are the vocals, which are unhinged and mind-scarring in the quality of their shrieking proclamations. The turbocharged energy of the song is irresistible, but surges even higher into the red zone through the appearance of high, scintillating leads, rippling in an intense and effervescent boil."
- NO CLEAN SINGING
goo.gl/wfKsMw

"In Shadows and Dust stick the middle finger up to those expectations by bringing crushing heaviness, exciting rhythm and melodic passages that has all the workings of Swede-Melo Death but so much more....Death metal rarely sounds this good."
- Games, Brrraaaiiins, and a Head-Banging Life
goo.gl/3BPgd8

" In Shadows And Dust plays a musical style that goes back to the 90's era of melodic Swedish black and death metal while also adding in a more aggressive approach to the genre, the production sounds very professional while the lyrics cover darkness themes. In my opinion In Shadows And Dust are a very great sounding melodic and old school mixture of black and death metal. RECOMMENDED TRACKS INCLUDE "Enlightened By Darkness" "Deathlike Silence" and "At the Edge Of The World". 8 out of 10
- A Different Shade of Black Zine
goo.gl/7nVdn5

"..once again in shadows and dust manages to push its limits to offer a powerful and elegant album, " enlightened by darkness " Bears its name. Time passes, this passionate man refines his art, gives him more and more importance and we really hope that December 21, 2019 will be synonymous with a new chapter of his life."
- United Rock Nations
goo.gl/o1bgaQ

" In Shadows and Dust : Enlightened By Darkness - Album
IN SHADOWS AND DUST blend Swedish death metal like early NECROPHOBIC, In Flames and At The Gates with the melodies from Naglfar and Dissection (Official). It's a combination that works good. But it's not until the third track, "Revenge", that it start to sound really good. This is absolutely something that you should check out. It's old school and have a classic sound, but it doesn't sound exactly like a thousand others. I didn't say that this is something unique though. But it's damned good."
- HardRockInfo
goo.gl/hG9Ec7

Born from the ashes of Pelvic Bones (1997) and The Evil One (1998), In Shadows and Dust is a one man HM-2 obsessed Death / Black powerhouse from France.

The band released their first EP in March of 2015 entitled “Fateless”. The the first full length album, “Soul Crusher”, would come soon after on December 21st, of the same year.

"Enlightened by Darkness" contains 9 tracks of HM-2 infused "old school" sound without compromise. Combining the best elements of Death Metal, Black Metal, and D-beat, In Shadows and Dust paint a violent picture with their penchant for sheer intensity. On December 21st, Redefining Darkness is proud to unleash In Shadow and Dust's Darkness to the world!!!

All rights reserved by In Shadows and Dust 2018

In Shadows and Dust France

Bandcamp Daily  your guide to the world of Bandcamp

Cannibal Corpse's George "Corpsegrinder" Fisher stops by for an interview